Some 25 plus members attended the AGM in the lovely setting of the Royal Blackheath Golf Club. Andy Jordan-Smith was elected President for the coming year.

After the meeting the members plus guest enjoyed a very pleasant meal. A more detailed account of the meeting will appear shortly. 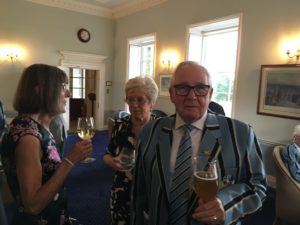 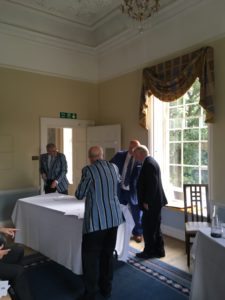 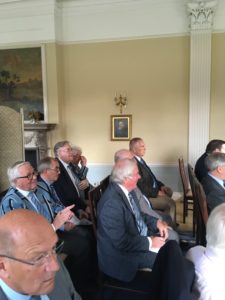 It was characteristic of Dick that he should have had firm ideas about his funeral arrangements. He wanted the cremation, which took place earlier this morning, to be a private matter, confined to his immediate family.  He wanted this Memorial Service, which he devised himself, to be for his friends.  He would be delighted and gratified that so many of you are here.

Dick was a man of lifelong friendships.  I have never known anyone who attended and arranged so many reunions.  As is apparent from the marvellous letters Joan has received, he had friendships going back to school and army; he had regular reunions with a dwindling number of his cricketing friends from the Old Askeans; he was a regular attender at golf excursions with his friends from  Customs, the Belton Bracers; he regularly met his team from the Investigation Branch – the Old Knockers; he never lost contact with his secretary; he was a regular for the Seniors team at Dulwich and Sydenham; he was a faithful attender at this church, except when I lured him away to play golf on a Sunday morning ~ sorry about that, Father Robert.  This is a reunion of so many groups of his friends and he would have loved to be here.

I first met Dick nearly forty years ago.  We first played golf at a course called Belmont near Faversham but it wasn’t long before our golf centred on Dulwich and Sydenham, where Harry Walsh and the late Frank Bond formed our regular weekend four-ball.

We played countless games together and I last played golf with Dick in September.  On the last green, when the match was in the balance, he gave me a 4-foot putt which I almost certainly would have missed.  He then had an 8-foot putt for victory.  It was the last stroke I saw him play and he holed it.  As a result of his generosity, I was reasonably pleased that he holed it at the time ~ but I’m immensely pleased now.

Our friendship went much wider than golf.   We shared a love of cricket and rugby.  I think of Dick every morning now when I turn on the radio to hear the cricket news from Australia.  I’m glad that he has been spared the result of the Brisbane Test Match.  We exchanged book suggestions.  Dick, Joan, Jill and I went to films together and discussed them over a meal afterwards.  In fact, the last time I saw Dick was on October 10th when the four of us went to the film On Chesil Beach, about which we had conflicting opinions.  Dick was never short of opinions.

October 10th ~ at that time he had not been diagnosed with pancreatic cancer and yet five weeks later to the exact day he died.  No wonder that losing him has been such a shock to all of us.

Dick was immensely proud of being a civil servant and in particular of being a member of Customs and Excise, as his father had been before him.  He was the best sort of civil servant.  He believed in public service; he had fairness and integrity, tempered with a sense of humour about the villains whom it was the stock in trade of Investigation Branch to deal with.  It cannot be said that he was an uncritical admirer of Her Majesty’s Constabulary but he would hear no wrong of his own Service.  If there had been any justice he should have been appointed to the Board of Customs but it was fitting that at the end of his career he was made a Commander of the British Empire for his achievements and his leadership.

It was perhaps inevitable that Dick’s sense of public service extended outside his professional life.  He and Joan have done a great deal for this church.  He served on the Council of Dulwich and Sydenham Golf Club for six years and was President from 2010 to 2013.  In that role he dealt with the problems and tensions which beset a golf club with a patience and courtesy which won the respect and affection of both members and staff.

It was a critical time for the Club because its lease from the Dulwich Estate was coming to an end and had to be renegotiated.  The negotiations were protracted and difficult but, largely as a result of Dick’s reasonableness and patience, have resulted in an agreement which has secured the future of the Club for many years to come.

Dick’s life was characterised by lifelong loyalty – and that found its supreme expression in his loyalty to Joan and his family.  He was immensely proud of Vanessa and Charlotte and of his grandchildren, Henry and Emma.  He was a wonderful husband, father and grandfather and his family returned his love and loyalty wholeheartedly.  He loved his home, not least his garden and his vegetables, on which I received regular reports on the golf course.

How can I sum up Dick’s qualities?  He was a good man and all our lives, including mine, have been enriched by knowing him.  I cannot do better than the epitaph which another Customs Officer – the Scottish poet Robbie Burns – wrote about his friend: –

An honest man is now at rest

The friend of age, and guide of youth

Few heads with knowledge so informed;

If there’s another world, he lives in bliss

If there is none he made the best of this.

This date was bedevilled by bad weather and snowfall, causing all kinds of travel disruption. However, it went ahead, producing :

“This time last week there were thirty eight of us due to be dining at The George Borough High St; in the event there were a hardy eleven us that sat down at the only surviving galleried London coaching inn. We tried valiantly to ensure that the bar takings were the same as if the thirty-eight were there, but sadly we failed although it were not for want of trying!

Many thanks to our gallant leader Steve for organising today’s event, the fish menu was excellent as was the wine and the company.

We few, we happy few, we band of brothers;
For he to-day that sheds his blood with me
Shall be my brother; be he ne’er so vile,
This day shall gentle his condition:
And gentlemen in England now a-bed
Shall think themselves accursed they were not here,
And hold their manhoods cheap whiles any speaks
That drank with us at The George Inn this day.”

Organiser for City Diners is Steve Homewood, who was stuck outside Lewisham station for two and half hours on his way home, – and no access to a toilet on the train…..!!!